After a restful night’s sleep, we woke up to seize the day. My roommate, as usual, was already up & out of the room by the time I woke up. I got myself ready in enough time to meet the rest of the group for the day trip.

After a good night’s sleep, we woke up to seize the day. My roommate was already up & out of the room by the time I awake. I got myself ready in time to meet the rest of the group for the day trip.

When I got to the lobby, I noticed that we were missing a couple of people. I asked my roommate if she knew where they were. One of them was still getting ready – he owns a fancy camera that took time to assemble – but she didn’t know what happened with the other person. What a coincidence… Uzi was the other person’s roommate. She walked over to where we were and heard us talking and wouldn’t you know it…

The other person who stayed at the bar last night was so hung over that she couldn’t be bothered with getting out of bed. She decided to stay in the hotel & refused to go anywhere. She also made a mess in the room – a hot vomiting ass mess. (She cleaned up the nastiness while we were gone for the day.) A couple of the others who stayed out drinking didn’t look too hot either, but I assume that since we were leaving Lisbon the next day, they forced themselves out of bed for the trip.

So much for tanning & drinking.

We walked to Lisbon’s underground and caught the train to another train that’d take us to our destination, Sintra.

Sintra is a quick train ride (less than an hour) away from metropolitan-area Lisbon; upon arrival, there are shuttle buses that take sightseers up the hills & mountains to see Portugal’s colorful history & architecture embodied in castles. Sintra’s history dates back hundreds of years and, at one point, was a major Moorish stronghold, as was all the Iberian Peninsula. Take a look at the photos below to see what I mean. 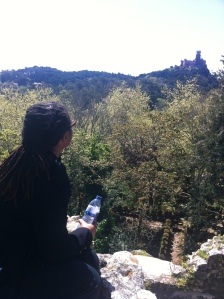 And here’s the top.

After conquering this castle, we headed over to Palacio Nacional da Pena (Wikipedia link), which is a separate castle but in the same area. Initially the site of a monastery in 1493, it was later rebuilt as a summer home for the Portuguese royal family. 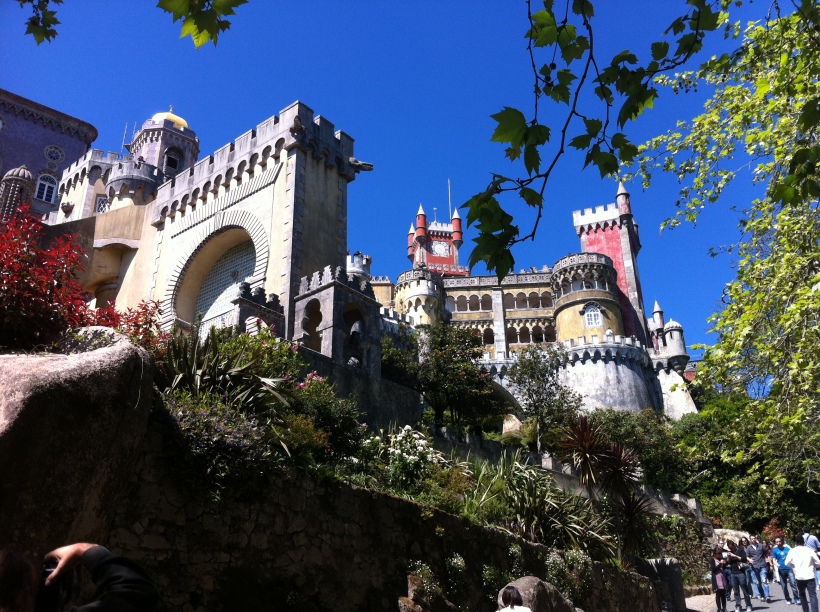 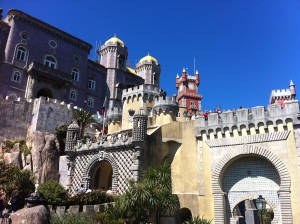 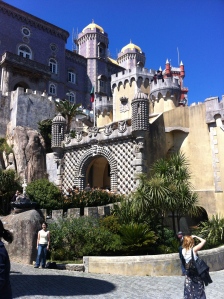 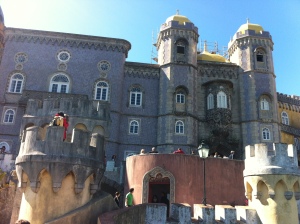 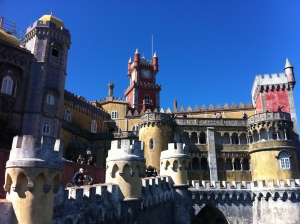 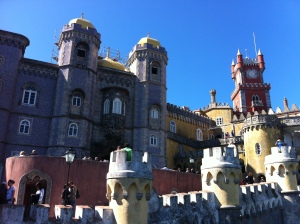 Taking photos in the castle isn’t allowed, but I can say that the inside of the castle is quite lavish, gaudy, and almost untouched since the last time any royals lived in it. I got a shot of a sundial away from the inside, though.

And another indescribable view:

We ate at the palace too.

After a nice, long, productive, unintended-exercise day, we headed back to the hotel. I don’t remember who returned first – us or the rest of the group – because I laid down on my bed and don’t remember much else. 😐 After that nap, though, we (me, roommate, Uzi) ate late dinner in the hotel restaurant.

Go ahead, say something. Cancel reply